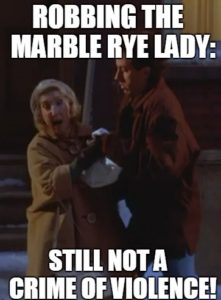 Notwithstanding Jones being put on hold, Judge Cogan of the Eastern District of New York has ruled — like the Jones court and Judges Ross and Weinstein in pre-Jones rulings — that New York robbery is not a “crime of violence.”  The decision, available here, explains that New York robbery can be committed with less than the “violent” force required by the force clause of the Career Offender Guideline (which controls in felon-in-possession cases), and that the Guideline’s residual clause was effectively invalidated by Johnson v. United States, 135 S. Ct. 2551 (2015).  Because the Guideline’s commentary has no independent force, and interpreted only the now-defunct residual clause, the fact that robbery is enumerated in the commentary is immaterial.  Judge Cogan also rejected the government’s argument that the 2016 amendment to the Guideline imposed no substantive change triggering the Ex Post Facto Clause.

Takeaway for the Defense Bar

Even in the absence of Jones, courts can — and do — rule that New York robbery is not a “crime of violence.”

Matt Larsen is an attorney in the Appeals Bureau of the Federal Defenders of New York
View all posts by Matt Larsen →
SCOTUS sets argument in Beckles v. United States for November 28, 2016
Engelmayer (SDNY) Finds Juvenile Should Not be Prosecuted as an Adult