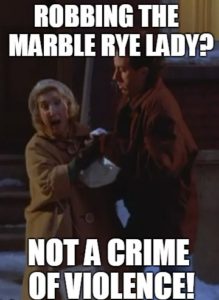 New York robbery, whatever its degree, is “forcible stealing” and requires actual or threatened “physical force upon another person.”  N.Y. Penal Law § 160.00.  This does not make the offense a “crime of violence,” the Circuit explained, because New York courts “have made clear that ‘forcible stealing’ alone does not necessarily involve the use of ‘violent force'” required to make something a “crime of violence” under the Guideline’s force clause.  “Violent force” is “strong” and “substantial,” Johnson, 559 U.S. at 140, but New York robbery can be committed with “less‐than‐ ‘violent'” force, the Court held, such as by “form[ing] a human wall” to facilitate the theft, “bump[ing]” the victim to get his money, or “tugg[ing]” to overcome the victim’s resistance.  New York robbery thus doesn’t qualify under the Guideline’s force clause.  And the residual clause, the Court said, “is likely void for vagueness in light of the Supreme Court’s analysis of the ACCA’s identical phrase in Johnson v. United States, 135 S. Ct. 2551 (2015).”

New York’s first-degree robbery statute has four subdivisions, but there was no adequate indication of which subdivision Jones violated.  The Court thus, consistent with the categorical approach, presumed his conviction rested on “‘least of [the] acts’ in the statute,” which the Court held was committing a robbery while “armed with a deadly weapon.”  N.Y. Penal Law § 160.15(2).  Such a robber is guilty “based simply on his possession of a deadly weapon during the robbery, even if he never brandishes, uses, or threatens to use such a weapon.”  Given this, the Court said, “we cannot conclude that the presence of a gun that a robber does not display, use, or threaten to use during a robbery has any effect on the nature of the force that the robber exerts on his victim.  Put another way, a robber’s possession of a concealed and unmentioned weapon while he commits a robbery can support a first‐degree robbery conviction under § 160.15(2) but such possession cannot turn what is otherwise less‐than‐violent force into violent force.  It is therefore possible to commit first‐degree robbery in New York in a way that does not fall within the Career Offender Guideline’s definition of ‘crime of violence.'”

1.  New York robbery no longer qualifies as a categorical “crime of violence” or “violent felony” under the Career Offender Guideline, U.S.S.G. § 4B1.2, or the cross-referenced or materially identical provisions in the Felon-in-Possession Guideline, U.S.S.G. § 2K2.1, the Armed Career Criminal Act, 18 U.S.C. § 924(e), or the general “crime of violence” definition found at 18 U.S.C. § 16.

2.  New York robbery in the third degree never qualifies because it requires only that someone “forcibly steals property,” N.Y. Penal Law § 160.05, which Jones holds may be accomplished with less than the requisite “violent force.”

3.  For the same reason, New York robbery in the second degree — either “aided by another person” or where “the property consists of a motor vehicle,” N.Y. Penal Law §§ 160.10(1), (3) — never qualifies.  As for subdivision (2), which the Court did not address, contact Federal Defenders of New York for guidance.

4.  Likewise, for subdivisions (1), (3) and (4) of New York’s first-degree robbery statute, which the Court did not address, contact Federal Defenders of New York for guidance.

“The definitions in” the Hobbs Act “’are copied from the New York Code substantially,’” Nedley, 255 F.2d. at 355 (citation omitted), and the New York robbery statute at the time of the Hobbs Act’s passage stated plainly that “the degree of force employed is immaterial,” N.Y. Penal Law § 2122 (1946), so long as it is “employed either to obtain or retain possession of the property or to prevent or overcome resistance to the taking.”  Id. § 2121.  Though the Code was revised in 1965, this feature of the robbery statute was not changed– as state case law and Jones confirm.

“It is a well-established principle of statutory construction that when one jurisdiction adopts the statute of another jurisdiction as its own, there is a presumption that the construction placed upon the borrowed statute by the courts of the original jurisdiction is adopted along with the statute and treated as incorporated therein.”  Aguon, 851 F.2d at 1164 (citations omitted).  Thus, when Congress adopted New York’s definition of robbery in passing the Hobbs Act, it adopted a definition that covers any forcible taking; and, as Jones confirms, a forcible taking can be accomplished without the “violent force” essential to a “crime of violence.”