During a guilty plea allocution to a drug conspiracy, the district court erroneously stated that the mandatory minimum term of supervised release term was 5 years, when it actually was 10 years, thereby violating Fed.R.Crim.P. 11(b)(1)(I)’s requirement the defendant be accurately informed about punishment, including “any mandatory minimum penalty.” Freeman preserved his challenge to the Rule 11 error by moving to withdraw his guilty plea before sentencing. The district court denied the motion. And the Circuit affirmed, saying the error was harmless (under Fed.R.Crim.P. 11(h)). But the Opinion’s stated purpose is to “clarify” that “a preserved challenge to a Rule 11 error is subject to harmless error review on appeal and that the government bears the burden of showing that the error had no effect on the defendant’s substantial rights.” Op at 3.

In Pedro Garcia-Hernandez, No. 19-2504 (2d Cir. Dec. 18, 2020)(summary order), the Second Circuit rejected a Rule 11 claim that the guilty plea was not knowingly and voluntarily entered because the district court’s explanation of the sentence the defendant faced was confusing. The district explained at the plea colloquy that the defendant was subject to a 10-year mandatory minimum sentence and that his Guidelines range was 70 to 87 months. Applying plain error review, the Court of Appeals concluded that the district court effectively conveyed to the defendant that 10 years “was the actual and inevitable sentence,” citing United States v. Johnson, 850 F.3d 515, 524 (2d Cir. 2017). The Court relied on the following facts to conclude that there was no basis to believe that a “more precise explanation” of the sentence he faced would have affected the defendant’s decision to plead guilty: when told …

In United States v. Luis Rosario, a summary order, the Circuit vacated a guilty plea to a § 924(c) count, charging Mr. Rosario with possessing a firearm in furtherance of a drug-distribution conspiracy, on the ground that the factual basis for his plea was insufficient. The essential facts are that Mr. Rosario participated in a drug conspiracy for about two months; that he occasionally used a white van during this time frame; and that a gun was later found inside the van. After arrest, Mr. Rosario said that he “carries the gun for protection.”

These were the only facts on the record when Mr. Rosario pleaded guilty. But as the Court summarized, “th[is] evidence . . . established only that Rosario possessed the gun while simultaneously engaging in a drug-trafficking conspiracy” and did not show a ‘specific nexus’ between the gun and the drug-trafficking offense . . . [as] …

The Court of Appeals issued its first opinion vacating a conviction under Rehaif v. United States, 19 S.Ct. 2191, 2194(2019), which held that a conviction under 18 U.S.C. 922(g) requires proof that the defendant not only knowingly possessed a firearm, but that he knew at the time that he was a prohibited person. In this case, United States v. Balde, No. 17-3337-cr(November 13, 2019), the defendant pled guilty to possessing a firearm while an alien illegally or unlawfully in the United States. The knowledge element established in Rehaif –- that he knew he was an alien unlawfully in the United States — was neither charged in the indictment nor admitted at his guilty plea. The government contended that he waived his right to appeal both in his plea agreement and in his plea. The Second Circuit rejected that argument, holding that Balde could not have waived his Rehaif…

Yesterday the Second Circuit vacated a conviction because a Northern District court violated the requirements of Rule 11 concerning the acceptance of a guilty plea. The summary order in United States v. Coffin (Walker, Raggi, Hall) is available here.

Mr. Coffin agreed to plead guilty to one count of possessing a firearm in furtherance of a drug trafficking crime, in violation of 18 U.S.C. § 924(c)(1)(A) . “Rule 11 requires that the district court, before accepting a plea of guilty, ‘determine that the defendant understands . . . the nature of each charge to which the defendant is pleading.'” Slip op. at 3-4 (quoting Fed. R. Crim. P. 11(b)(1)(G)). The district court, however, did not adduce any facts that would establish such an understanding. Instead, it simply said that the plea agreement contained facts that would support his guilty plea, and asked Mr. Coffin whether those facts were true.…

United States v. Rigo, 15-1914, remanded the case for resentencing. The Second Circuit held that the district court committed plain error in calculating the loss amount for the purposes of determining the guideline range. The Circuit explained that “the scope of conduct for which a defendant can be held accountable under the sentencing guidelines is significantly narrower than the conduct embraced by the law of conspiracy.” Order at 2. The “emphasis in substantive conspiracy liability is the scope of the entire conspiracy” but the guidelines are concerned with “the scope of the individual defendant’s undertaking.” Id. (emphasis in original). In other words, even if the acts of co-conspirators were foreseeable to the defendant, they do not constitute relevant conduct for guidelines purposes if they were “not within the scope of the defendant’s agreement.” Id. at 3. … 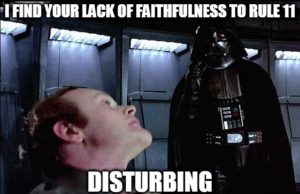 In accepting a guilty plea to producing, distributing and possessing child pornography, the district court (Geraci, Ch.J.) failed to advise the defendant of “five of the approximately fifteen rights” listed in Federal Rule of Criminal Procedure 11.  The Circuit found this troubling, as the “Court has stated time and again that [w]e have adopted a standard of strict adherence to Rule 11” and that “compliance with Rule 11 is not a difficult task” because “errors can be avoided if a district or magistrate judge has a standard script for accepting guilty pleas. . . .  Yet failures to meet those requirements are a recurring issue.”  The Court further cautioned that “even strict adherence to Rule 11 …

The Circuit addresses two issues in this case: the first concerns its jurisdiction to review a judgment of conviction that imposes a sentence of imprisonment and restitution but leaves the restitution undetermined; the second, whether the district court’s failure to advise the defendant about mandatory restitution, during the plea allocution, is plain error warranting vacutur of the defendant’s guilty plea.

The Circuit holds (1) that a judgment of conviction imposing both a sentence of imprisonment and restitution, but that leaves the amount of restitution for a later determination — and one that here, never happens — is nevertheless “final” under 28 U.S.C. § 1291, and the Circuit therefore has jurisdiction to review the judgment; and (2) that a district court’s failure to advise the defendant of mandatory restitution …

Defendant Culbertson was arrested during an investigation into the importation of heroin and cocaine into the United States from Trinidad, after his girlfriend was arrested at the airport. He was charged with offenses that, based on the drug type and quantity alleged – 100 grams or more of heroin and five kilograms or more of cocaine – carried a ten-year mandatory minimum.

Culbertson was a difficult guy – he went through so many appointed attorneys that the district court finally forced him to go pro se- and consistently disputed the quantity of drugs attributable to him. At his plea, Culbertson insisted that the offense involved only “three kilos” of cocaine – that is what he said his girlfriend had been recruited to import, even though she in fact had more than five in her luggage – …

Defendant Peter Paul pled guilty to securities fraud, in connection with a stock manipulation scheme that permitted him to fraudulently obtain multi-million dollar margin loans, which he never repaid, from two brokerage houses. The district court sentenced Paul principally to 120 months’ imprisonment and more than $11.4 in restitution.

He raised three main claims on appeal, all without success.

At a pretrial conference, the district judge remarked that he had a reputation for giving a Guideline sentence after trial but for being lenient with defendants who pled guilty. The judge also remarked that the twenty-five months Paul spent fighting extradition in Brazil – he apparently fled there as his scheme was unraveling – would not be credited if he did not plead guilty. On appeal, Paul claimed that these remarks violated Fed.R.Cr.P. 11(c)(1), which …