In United States v. Jones, No. 20-3009 (2d Cir. Aug.1, 2022), the Circuit (Livingston, joined by Chin and Nardini) held that the defendant’s state guilty plea did not preclude him from challenging the evidence seized pursuant the state warrant in his federal case because the Fourth Amendment claim was not raised in state court. On the merits, the Court upheld admission of the evidence under the good faith exception to the exclusionary rule.

Jones had pled guilty to sexual exploitation of a minor in Tennessee based on evidence seized under several warrants and was subsequently charged in federal court with production of child pornography with respect to another minor. The defendant moved to suppress that evidence seized under the Tennessee warrants, and the federal warrants as fruit of the poisonous tree. The district court held that Jones’s state guilty plea collaterally estopped him from challenging the Tennessee warrants and, …

In United States v. Smith, the Circuit (Meyer, D. Conn., joined by Katzmann and Kearse), the Circuit held that police violated the Fourth Amendment by waiting 31 days before seeking a warrant to search a seized tablet computer, but declined to apply the exclusionary rule because the error was due to “isolated negligence,” and because existing precedent would not have told an objectively reasonable police officer that the delay was unreasonable.

Police encountered Smith, drunk to the point of unconsciousness, in his car on the side of the road in a rural area of upstate New York. After removing Smith from the car, and while searching the car for identification, an officer observed a tablet computer on the front passenger seat displaying what appeared to be child pornography. The officer arrested Smith for DUI and seized the tablet. Smith was released and refused consent to search the tablet. However, …

The Second Circuit issued two criminal opinions today, both of which we will cover this week. In one, United States v. Pabon, the Circuit rejected a set of Fourth Amendment challenges where police obtained a CT scan which revealed that the defendant was body-packing narcotics. The opinion, available here, is as notable for what it does not hold as for what it does. 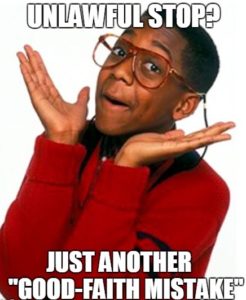 In yesterday’s Utah v. Strieff, five of the eight members of the Supreme Court held the existence of an arrest warrant for someone a police officer unlawfully stops sufficiently “attenuates” the taint of the illegal stop, at least where the stop is not “flagrantly” unconstitutional.

Based on an anonymous tip, a South Salt Lake City police detective conducted “intermittent surveillance” of a house to see if it was being used to sell drugs.  He saw people leave “a few minutes after arriving at the house,” and this “raise[d] his suspicion that the occupants were dealing drugs.”  One day he saw Strieff leave the house; he followed Strieff on foot and stopped him.  When he got Strieff’s ID card and relayed the information to a colleague, he discovered “Strieff had an outstanding arrest warrant for a traffic violation.”  The detective then arrested Strieff and searched him, finding drugs in his …

In 2009, federal agents armed with a search warrant for the first-floor apartment of an apartment building in the Bronx, instead searched the second-floor apartment. The circuit agreed with the defendant that this search violated the Fourth Amendment’s warrant requirement.  It vacated his conviction and sentence.

This case began as an investigation by I.C.E. agents who learned of an IP address associated with a file-sharing network implicated in child pornography. Ultimately, the IP addressed was traced to Voustianiouk; the internet service provider indicated that his address was “2424 Cambreleng Avenue, Apartment 1,” in the Bronx. An agent, Raab, confirmed that Voustianiouk lived at that address, although he could not confirm which apartment. He eventually obtained a warranted to search “Apt. 1” in that building, which the warrant described as “a ground floor apartment …

Back in June, in a case called Julius, after finding a Fourth Amendment violation, the circuit remanded the case so that the district court could perform a cost-benefit analysis in deciding whether to apply the exclusionary rule. See Julius’ Seizure, posted June 19, 2010. According to Julius, such an analysis is now required under the Supreme Court’s decision in Herring v. United States, 129 S. Ct. 695 (2009). Here, the court took Julius one step further, performing its own Herring analysis and concluding that the exclusionary rule should not apply.

Here, the district court granted the defendant’s motion to suppress a gun seized during Julius’ arrest on a parole violation. on the government’s appeal, the circuit remanded for reconsideration in light of Herring v. United States, 129 S.Ct. 695 (2009).

In 2007, Julius violated the conditions of a term of special parole imposed after a state court conviction in Connecticut. He had failed to attend court-mandated counseling sessions and had changed his residence but refused to disclose his new address to his parole officer.

The officer finally found Julius at his girlfriend’s house, where the officer, accompanied by another parole officer and a deputy marshal found him lying on a bed in a back bedroom. They arrested him without incident. As an officer removed him from the room, in handcuffs, the marshal searched the …