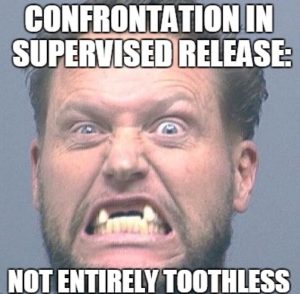 First, “18 U.S.C. § 3583(e) does not preclude revocation of supervised release on the basis of conduct that earlier prompted a modification of supervision conditions.”  Here, the district court first modified Harris’s terms of supervision — based on his being arrested for allegedly selling drugs — and later revoked supervision when that suspected violation was confirmed by two police officers credibly testifying to witnessing the drug sale.

Second, Federal Rule of Criminal Procedure 32.1(b)(2)(c) does not preclude revocation of supervised release on the basis of hearsay if (1) there is good reason to proffer hearsay and (2) the hearsay is sufficiently reliable.  Here, a witness who claimed Harris punched her “professed fear of retaliation” if she testified against him, which the Court deemed good reason to excuse her absence, and her claim of being punched was sufficiently reliable given a 911 call, an officer observing her cut lip, and additional officers testifying to the credibility and consistency of her reporting the assault to them.

1. The Court’s first holding is a reminder that supervised release is part of a sentence and essentially a continuation, outside prison walls, of the monitoring and control the government may broadly exert over defendants’ lives.  It may be modified and/or revoked, as appropriate, at any time.

2. A defendant’s right to confront the witnesses against him retains its (diminished) bite in the supervised release context: though the hearsay declarant in this case was exempted from cross-examination, that was because of the multiple specific and credible pieces of evidence establishing the reliability of her claim.  Where such evidence is lacking, Rule 32.1(b)(2)(c) should require the declarant to appear.

Matt Larsen is an attorney in the Appeals Bureau of the Federal Defenders of New York
View all posts by Matt Larsen →
Tax Attorney’s Conviction Affirmed
Is Hobbs Act Extortion a “Crime of Violence”?